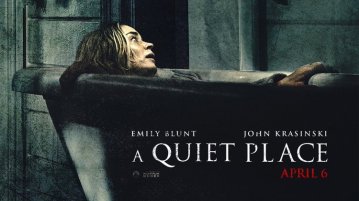 “Who are we?” asks Evelyn of her husband Lee, regarding their children in the film, A Quiet Place. “Who are we if we can’t protect them?”

Directed by and starring John Krasinski (The Office) alongside real life wife Emily Blunt (Sicario), A Quiet Place is as an exciting, fresh addition to the horror genre. But it is in the quieter moments – ironic, I know – where we find the heart of the film: the trials of parenting and preparing your children for what lies ahead. It just so happens Lee (Krasinksi) and Evelyn (Blunt) rear their children in a dystopian world where sightless monsters hunt wherever they hear noise. The family walks barefoot on strategically placed sand paths and communicates through sign language. Bags of chips are left behind on trips for food and soft, colored cotton balls are used for Monopoly pieces. The quieter they are, the safer they are. They aim to maintain as much normalcy as they can afford while keeping vigilant against the new world’s dangers. The children are naturally restless but they soon learn how terrible the stakes are in the opening sequence, which is sure to rival Up’s in familial tragedy.

One of their children, Regan, played with heart and grit by deaf actress Millicent Simmonds, was born deaf, making the the family’s adjustment not entirely new. Though they communicate via sign language, she feels adrift from them, openly pessimistic of her father’s attempts to improve her hearing aids. “It. Never. Works,” she signs with force to a dejected Lee before storming off. Though the silence keeps the family safe, it’s limiting. The growing pains of children still persist in this post-apocalyptic setting – the need for elaborate conversation has been replaced by contingencies for worst-case scenarios. The parents and children are at an impasse where more needs to be said, but survival won’t allow it.

Bravo to all actors involved for not saying, but showing with their facial expressions this disappointment. After all, Krasinski is a pro at capturing the proper response of the surrounding madness with the briefest looks. He and Blunt raise two children in real life as well, which lends their performances that authenticity of feeling every wound their children suffer. 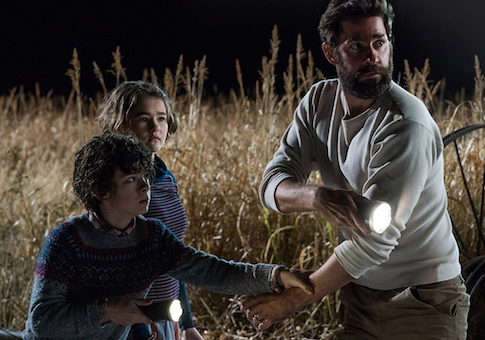 A Quiet Place is billed as horror but plays better as a thriller with some horror tendencies. The quiet atmosphere makes the pop-up scares all the more jolting, true, but the sense of impending doom isn’t very overwhelming – just formidable, which is fine. The film is a considerate ninety minutes long, saying all it needs to say with not one wasted scene. Krasinski directs (and co-wrote the screenplay) with style and restraint, not allowing himself to fall in any obvious traps. Post-apocalyptic movies can overstay their welcome fast with overwrought subject matter but Krasinski wisely keeps the focus squarely on this family staying together.  He keeps the monsters – unique-looking with heightened hearing senses that scare you into breathing quieter in your seat – at a distance to keep your anxiety at full tilt, not daring to show them until necessary. Horror requires a more consistently hopeless sense of terror but Krasinksi doesn’t allow it. The film could have played well as a chapter of the Cloverfield saga. But the recent successes of Get Out and It make this film an easier sell as horror for Universal, I suppose. Luckily, it doesn’t detract from the film at all.

The soundtrack at times works against the concept of deepening silence around which the film’s premise is built, but it’s a forgivable wrinkle. It serves the suspense well without totally compromising the silence – an acceptable yin to the yang. Despite this, people have claimed the film’s silence makes them anxious over how loud they eat their movie snacks. But Krasinski proves to be a skilled director, keeping your eyes and ears at attention. After all, Jim Halpert’s been known to advocate total silence.

Why you should see this movie? It’s an enjoyable thriller (ok, horror movie) with memorable monsters that is smartly written, directed, and acted by a guy we all know well, but are beginning to see his star rise. Emily Blunt always delivers, especially having to give birth in torturing silence with a monster nearby; her real life marriage to Krasinksi drives home the dominant theme of family. No spoilers here, but Lee shares a pivotal, heartening moment with Regan in the climax, stamping a definitive exclamation mark on just who he is as a protector (Evelyn’s protector moment is more badass.) The kids hit every note, whether its fear, frustration, happiness, sadness, etc. They wear it all on their faces when words aren’t allowed. Impressive all around.

So before Avengers: Infinity War kicks off the summer movie season with all the noises your ears can endure, check out this exciting movie about the most impressive streak of the quiet game two parents have ever implemented with their kids.